The tourism sector in Spain has a great relevant, as pointed out by the general director of Turespaña, Miguel Sanz, and it is also characterized for being a source of income for women, since they participate more actively in it. Thus, according to the Economically Active Population Survey (EPA), men working in the hotel and catering industry accounted for 6.9% in the third quarter of 2020, while women accounted for 8.8%.

Consequently, and with the arrival of COVID – 19, unemployment has increased in this sector, with hardly any progress that could suggest that the situation has improved. There has been an increase in the unemployment rate in tourism activities by 17.3% in the third quarter of the year, in the middle of the high season, compared to 10.7% in 2019. This represents a great regression of the achievements made up to the moment when the pandemic has arrived, thus slowing down the empowerment of women in tourism and all the opportunities offered to them in the face of equality between the sexes, something that in the words of the World Tourism Organization is a clear factor that produces a large multiplier effect on employment. Alessandra Priante, director of the regional department for Europe of the World Tourism Organization (UNWTO), has stated that it is estimated that in Spain the tourism situation prior to the arrival of COVID – 19 can be reached in the best of cases by the end of year 2021 or early 2022.

Although there are few women who have recovered their job or have gotten one, most of them find themselves in a dead end, being the impact on their economic conditions a shattering and already emerging as one of the great affected by the repercussions of the coronavirus crisis. That is why Carlos Garrido, president of the Spanish Confederation of Travel Agencies (CEAV) has clearly shown that this crisis is and will be the crisis of tourism.

Bearing this in mind, the IMPETU project “Impact of the Pandemic on Tourism in Spain: Implications on the Employment of Women in a Female Sector” has been created, coordinated by the Universidad Complutense of Madrid, and in which participate researchers from the University of Seville, Polytechnic University of Valencia, Francisco de Vitoria University and ESIC, in addition to our association, Helsinki Spain. This project has been selected by the Supera Covid-19 Fund financed by CRUE Universidades and Banco Santander. 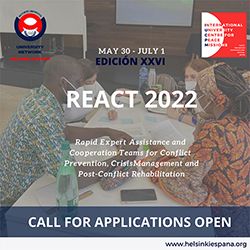