Numerous scholars have highlighted that the actions of mothers and fathers have a direct influence on their sons and daughters and vice versa, finding in most cases a lack of communication and understanding between the former and the latter, something that affects the emotional intelligence of both. That is why Helsinki Spain opens a new call for mothers and fathers dealing with the following topics:

• Emotional intelligence and how it can be integrated from home education.

• Why now and what are the challenges of the 21st century in terms of emotional intelligence.

• Pillars of education throughout life.

• Forms of expression as models for their learning in communication.

• Strategies and ways to educate in self-control and conflict resolution from a respectful education.

On this occasion, we will have a presentation by Raquel Martínez González, a health psychologist with more than 20 years of experience in developing and training family members and teaching staff about adolescents at risk. 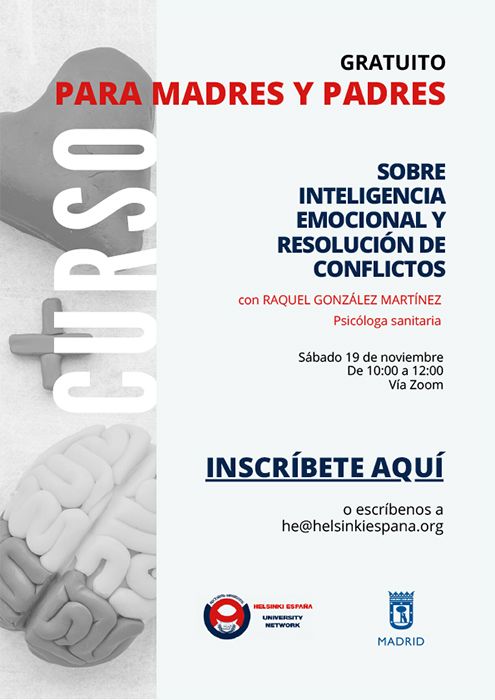 Yesterday we launched the 26th edition of our REACT program.

The inauguration took place in the locality of El Albir in Alfaz del Pi, Alicante, Spain. The session began with opening remarks by Ms. Martine Mertens, who welcomed all attendees on behalf of the Alfaz del Pi City Council. Subsequently, the President of Helsinki España, Ms. Maria Jaen, took the floor and officially announced the beginning of the program. On behalf of the entire Helsinki España team, she welcomed all guests and expressed special appreciation towards Under-Secretary for Peace Operations, Jean-Pierre Lacroix, whose presence, she kindly remarked, made the launch of this year’s edition “my most special opening to date”. Ms Martine Mertens then introduced and gave the floor to USG Lacroix.

“In the face of contemporary challenges, all of us working on conflict prevention, crisis management, peacekeeping and peacebuilding should strive to nurture our skills, share lessons learned, and foster new partnerships. This is why programs like REACT are so important and why all of us in the Department of Peace Operations welcome the opportunity to partner with Helsinki España,” said Under-Secretary General for Peace Operations, Jean-Pierre Lacroix. At the end of his address, he addressed this year’s participants: “Mindset and motivation – these are critical elements for success in peace missions”, he added. “I hope that many of you will serve in our missions.”

REACT is Helsinki España’s flagship international peacebuilding program: a comprehensive 220h in-person training on Conflict Prevention, Crisis Management, and post-Conflict Rehabilitation. It was launched in 2003 by proposal from Spain’s Ministry of Foreign Affairs and Cooperation with support from the OSCE and the United Nations, with the aim of equipping selected professionals with the skills and competencies required to deploy in international peace operations. This year’s edition will last from May 30th to July 1st, with its first four weeks taking place in Alicante.

What makes this month-long program unique, besides being imparted by high-profile experts and trainers from international and public institutions – including numerous UN agencies; the OSCE, EU, NATO, and ICRC; and Spain’s ministries of Defense and Foreign Affairs – is that it represents an opportunity for both career development as well as career transition and is the only training program of its kind that takes place in Spain. The 2022 cohort includes students from 11 different nationalities: from Brazil, Colombia, Mexico, and the United States; to Cameroon, Nigeria, Syria, and India, among others.

Over the past 19 years, Helsinki España has successfully organized 25 REACT editions, training over 500 professionals from 70+ countries (including during COVID-19). Attesting to the success of the program, today REACT alumni (the majority of whom are women) are deployed in 85+ countries; operate virtually within all sectors (public, private, NGO) and at all levels (from entry-level to senior management); and represent one of Spain’s main contributions to human-centred international peace and security efforts. Together with Helsinki España staff, diplomatic corps, local authorities, and media, some alumni had come from as far as Nigeria and India to attend the inauguration of the program with USG Lacroix.

USG Lacroix arrived in Spain on Sunday May 29th – on the date the UN commemorates the International Day of United Nations Peacekeepers to recognize the service and sacrifice of the more than one million personnel who have served under the blue flag since 1948, and to honour the memory of those peacekeepers who have lost their lives in the cause of peace.

This year, the United Nations will mark the occasion under the theme People Peace Progress: The Power of Partnerships to highlight the importance of partnerships – with Member States, local communities, regional organizations, NGOs and civil society, and within the UN system – in building and sustaining peace and achieving peacekeeping mandates.

Candidates interested in participating in REACT 2023 can already submit their applications. For more information about the program, visit its official profile on ReliefWeb.

On November 16, the “Serge Lazareff” award of the North Atlantic Treaty Organization was delivered in Torrejón de Ardoz.

The Alliance recognizes with this distinction the relevant contribution of the awardees to NATO’s legal affairs. Among the awardees, we highlight our President Maria Jaen, the only civilian woman awarded for her contribution to the Alliance’s legal department.

The awards were presented by Andrés Muñoz Mosquera, Director of the Legal Department of the Headquarters Allied Forces Europe (SHAPE).

This award was created in 2017 by NATO in honor of French jurist Serge Lazareff, who was General Eisenhower’s interpreter during his military service as a French Army officer in World War II.

With this award, we recall the importance of civilian collaboration in peacekeeping processes and the promotion of human rights at the international level.

REACT; training of civilians, for the building of peace

Faced with the risks and threats to International Peace and current conflicts, more than twenty people of different nationalities met in Alicante and later in Segovia, to make possible the XXV edition of REACT- Rapid Expert Assistance and Co-operation Teams- , a five-week training program on peace processes and conflict prevention, organized by the Helsinki Spain Association.

Rapid Expert Assistance and Co-operation Teams (REACT), was created in 2003 by the Organization for Security and Cooperation in Europe (OSCE) and organized by the Helsinki Spain Association, with the aim of preparing professionals with various interested career paths in improving their knowledge in conflict prevention, crisis and post-conflict management, rehabilitation and development, as well as their practical skills for field work in international peace operations.

It is an initiative composed of 7 modules that was born to provide participants with the knowledge and skills necessary to understand and analyze the main threats to international security and peace, the situations in which armed conflicts arise, their key actors and its impact on civilians. Likewise, it is intended to improve the capacities of the participants in the prevention, management and resolution of conflicts, as well as the protection of civilians in armed conflicts and, to strengthen the competence and confidence of the members when dealing with risk situations and / or criticism effectively, as would happen in peacekeeping work.

Throughout the 25 editions of the course, there have been experts from international organizations (United Nations, European Union, OSCE and NATO), diplomatic personnel and other officials, as well as military and police personnel, members of the International Committee of Red Cross and other humanitarian NGOs, as well as independent consultants and staff from different international universities.

On this occasion, the 25th Edition of REACT composed of twenty-two participants from; Colombia, Spain, Nigeria, Mexico, Argentina, Ethiopia, Cameroon, Togo, Lebanon, the Philippines, Canada, Jordan, Italy, France, China and Liberia has taken place in L’Alfas del Pi, in Alicante, in collaboration with the councils of Cooperation and Volunteering, Residents and Equality of the City Council. Until June 26, the program has been developed at the Platja Social Center, where six of the seven modules based on training in conflict prevention and peacebuilding, international law, protection of civilians, current conflicts and threats to peace were included. and international security, key actors and their contribution to international peace and security and tools for sustainable peace.

The seventh and last module called Hostile Environment Awareness Training (HEAT) is taking place in Los Angeles de San Rafael, Segovia, from June 27 to July 2, thanks to which, students participate in simulations to learn to deal with risks partners and other critical or emergency situations during mission deployment, such as team members in an international field operation. The HEAT content covers skills and competencies on how to act in the event of kidnapping, hostage-taking and encounters with weapons, mines and explosives; through the acquisition of knowledge about first aid in hostile environments and orientation and communication in the field; to driving an SUV and defending against chemical, biological, radiological and nuclear weapons.

REACT is the only training course of these characteristics that takes place in Spain and to date it has trained more than 400 people. Throughout its 25 editions, the Helsinki Spain Association has worked under the conviction of the transformative power of education and the need to train people from all kinds of countries and situations in conflict prevention, crisis management and post-conflict, as the best instrument at our disposal to contribute to the global efforts for the construction of Peace.

L’Alfas of the Pi is based, for 15 days, a new edition of REACT, one training program five weeks on peace processes and conflict prevention, organized by the Association Helsinki Spain, who attended a fortnight people from Cameroon, Colombia, Spain, Mexico, Nigeria, Argentina, Afghanistan, Togo and Ethiopia. An activity that takes place in the municipality thanks to the collaboration of the Councils for Cooperation and Volunteering, Residents and Equality.

The faculty is made up of trainers and experts from international organizations (United Nations, European Union, OSCE and NATO), diplomats and other officials, military personnel, police, experts from the International Committee of the Red Cross and other humanitarian NGOs, independent consultants and professors of college.

During their stay in l’Alfàs, the students of the REACT course have been able to enjoy two cultural visits to the Faro de l’Albir and the Villa Romana Open Air Museum, in order to get to know two emblematic places of the municipality. Activities organized by the Town Hall of l’Alfàs del Pi.

REACT was created in 2003 with the aim of preparing professionals with diverse career paths interested in joining the Rapid Expert Assistance and Co-operation Teams (REACT) of the Organization for Security and Cooperation in Europe (OSCE). Throughout its 24 editions, more than 500 people have been trained.

Through this program, professionals from different fields interested in improving their knowledge in conflict prevention, crisis and post-conflict management, rehabilitation and development are trained, as well as their practical skills for field work in international peace operations.