On Monday, October 25, the canarian youth enrolled in Youth for Youth began the training course on Human Rights. This course will take place until Friday, October 22, in the Nexo building located on the Tafira campus, thanks to the collaboration of the University of Las Palmas de Gran Canaria (ULPGC). The president of Helsinki Spain, María Jaén, and the Vice-Chancellor for Students, Alumni and Employability of the ULPGC, David Sánchez, opened the course this Monday. (You can see the news at the ULPGC’s web)

Throughout the week, the students will be trained on human rights, sustainable development goals and other related subjects such as gender equality, mental and emotional health, environment protection, migration, refugees and asylum, the fight against bullying. and the responsible use of social networks. The course is given by experts in the different subjects, having the students the opportunity to recreate some of the dynamics that they will later put into practice in the schools.

It will be an intense but crucial week to train and transmit what you have learned to the little ones!

Inauguration of the REACT program in its XXV edition

Yesterday, we successfully launched out REACT’s course XXV edition (Rapid Expert Assistance and Co-operation Teams). The Social Centre Platja Albir de l’Alfàs del Pi in Alicante, Spain kindly welcomed us in their facilities and gave us the space we required to implement the course. This year’s participants will be staying in Alicante until 26th June and will later go to Segovia to receive a practical training course about handling the critical situations and/or emergency situations while being deployed in hostile environments.

During our opening event, the Cooperations and Volunteering councilors: Isabel Muñoz and Martine Mertens as well as Equality councilor: Rocío Guijarro joined our president María Jaén Barandiarán and our secretary general Ángela Suárez Jaimes to welcome the participants who assisted.

REACT, ever since its creation in 2003, has maintained its main goal to be: prepare professionals with diverse career paths who are interested in joining REACT also from the Organization for Security and Cooperation in Europe (OSCE). This year this course takes in people who have traveled from different parts of the world such as Afghanistan, Argentina, Cameroon, Colombia, Spain, Ethiopia, Mexico, Nigeria and Togo with the purpose of providing necessary knowledge and abilities to achieve a good management in peacebuilding and conflict prevention.

In this edition, REACT has the honor to receive professors and lecturers who have vast knowledge in humanitarian action, human rights, gender equality, peace missions, etc. and they also have the experience of working in international organizations such as the United Nations, European Union, OSCE, OTAN, International Committee of the Red Cross, NGOs with a humanitarian nature, among others.

For our first course that took place yesterday, our participants attended the lecture regarding the topic International Human Rights Law taught by Professor Adam Dublin who was a legal fellow in the United Nations Office of the Co-Prosecutors at the Cambodian genocide tribunal and also worked in India in issues related to human rights and girls and women’s protection.

The objective of the course on ‘Gender Equality and Human Rights’ is to provide teachers with the necessary tools to identify inequalities in the educational field, and to develop a non-sexist education that provides values of equality and contributes to overcoming discrimination and social prejudices.

Similarly, this course is aimed at providing the necessary resources to carry out equal educational practices in the classrooms.

To date, we have trained more than 100 teachers in gender equality and human rights. 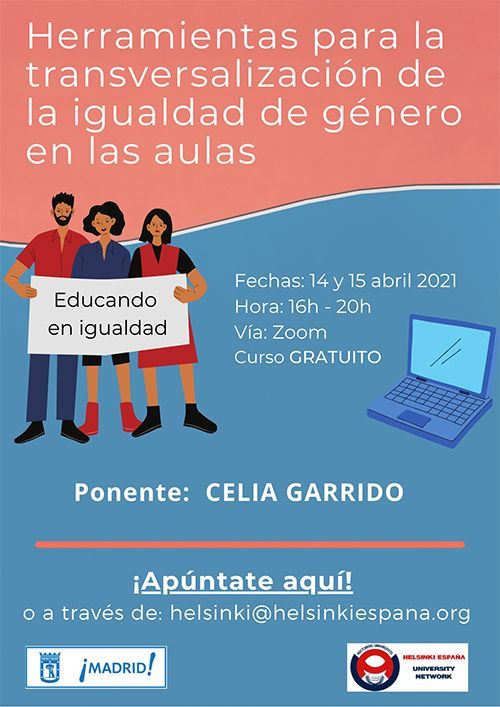 Spain continues to lead the ranking of economies with the highest percentage of unemployed youth. According to data from the Labour Force Survey from the Ministry of Employment and Social Security, the unemployment rate for young people aged 16 to 24 is 33,3%.

The low activity rates, the very high unemployment figures, and the precarious working conditions compromise the future of a generation that feels frustrated, condemned to social marginalization, and unable to achieve full autonomy and a future outside of their families.

The youth unemployment rate of Spain is the highest in the EU, with 33% it even surpasses the Greek data (32,5%). Spain also has the worst working conditions for young people.

Moreover, according to the report of labour insertion of the university graduates presented last July (2019) by the Ministry of Science, Innovation and Universities, Spain is one of EU countries where the graduates performed low-skilled Jobs. 37,1% of the graduates in Spain performed these jobs, compared to 23,2%, the European average, according to data from the CYD Foundation report of 2017.

In Spain, 30% of university graduates 4 years after graduating are still unable to find a job. This can lead them to social exclusion after all the work and effort made.

On the 27th of May of 2020, UN news published that the impact of COVID-19 has been disproportionate among the young workers. More than one out of six is unemployed, and the working hours of those who have kept their job have been reduced by a 23%, as claimed by the most recent report of the international institution that deals with labour issues. The report also indicated that the rapid and substantial increase in the young unemployment register since February has affected women more than it has affected men.

El País newspaper reported on the 3rd of June of 2020 that the youth unemployment rate had increased seven-tenths between March and April in the nineteen countries that share the euro. It reached 15,8% and increased eight tenths in the European Union until reaching 15,4%. Date confirms that Spain had the highest youth unemployment rate among the member states for which Eurostat published data in April, the indicator saw a monthly increase of eight tenths, while in year-on-year terms the growth was of two tenths, reaching 33,2%.

The ILO reported that the pandemic will have a triple impact on the young people, not only it destroys their jobs, but also their education and training. Because of this, ILO has demanded “urgent, concrete, and large-scale” political answers aiming to support the youth. The director of the ILO office in Spain, Joaquín Nieto, has warned that this situation is especially relevant for the Spanish labour market, which was already suffering from one of the highest youth unemployment rates in the world. In fact, he believes that Spain “cannot allow a high youth unemployment rate to be installed in a structural manner, which could mean a failure with disastrous long-term consequences for an entire generation”. He then recommended implementing a special Youth Guarantee plan so that young people without a job and without studies are offered a job or a training proposal. At the global level, the general secretary of the ILO, Guy Ryder, has highlighted that if “immediate and significative” measures to improve the conditions of this generation “they could carry the legacy of the virus for decades”

Considering all this data, Helsinki Spain decided to once again re-launch our project “Employment Guidance and Social Collaboration”, with the help of the community of Madrid.

Our project is aimed at young graduates from the community of Madrid who are currently unemployed and under 35 years.

The project is going to take place from September to December 2020.