REACT; training of civilians, for the building of peace

Faced with the risks and threats to International Peace and current conflicts, more than twenty people of different nationalities met in Alicante and later in Segovia, to make possible the XXV edition of REACT- Rapid Expert Assistance and Co-operation Teams- , a five-week training program on peace processes and conflict prevention, organized by the Helsinki Spain Association.

Rapid Expert Assistance and Co-operation Teams (REACT), was created in 2003 by the Organization for Security and Cooperation in Europe (OSCE) and organized by the Helsinki Spain Association, with the aim of preparing professionals with various interested career paths in improving their knowledge in conflict prevention, crisis and post-conflict management, rehabilitation and development, as well as their practical skills for field work in international peace operations.

It is an initiative composed of 7 modules that was born to provide participants with the knowledge and skills necessary to understand and analyze the main threats to international security and peace, the situations in which armed conflicts arise, their key actors and its impact on civilians. Likewise, it is intended to improve the capacities of the participants in the prevention, management and resolution of conflicts, as well as the protection of civilians in armed conflicts and, to strengthen the competence and confidence of the members when dealing with risk situations and / or criticism effectively, as would happen in peacekeeping work.

Throughout the 25 editions of the course, there have been experts from international organizations (United Nations, European Union, OSCE and NATO), diplomatic personnel and other officials, as well as military and police personnel, members of the International Committee of Red Cross and other humanitarian NGOs, as well as independent consultants and staff from different international universities.

On this occasion, the 25th Edition of REACT composed of twenty-two participants from; Colombia, Spain, Nigeria, Mexico, Argentina, Ethiopia, Cameroon, Togo, Lebanon, the Philippines, Canada, Jordan, Italy, France, China and Liberia has taken place in L’Alfas del Pi, in Alicante, in collaboration with the councils of Cooperation and Volunteering, Residents and Equality of the City Council. Until June 26, the program has been developed at the Platja Social Center, where six of the seven modules based on training in conflict prevention and peacebuilding, international law, protection of civilians, current conflicts and threats to peace were included. and international security, key actors and their contribution to international peace and security and tools for sustainable peace.

The seventh and last module called Hostile Environment Awareness Training (HEAT) is taking place in Los Angeles de San Rafael, Segovia, from June 27 to July 2, thanks to which, students participate in simulations to learn to deal with risks partners and other critical or emergency situations during mission deployment, such as team members in an international field operation. The HEAT content covers skills and competencies on how to act in the event of kidnapping, hostage-taking and encounters with weapons, mines and explosives; through the acquisition of knowledge about first aid in hostile environments and orientation and communication in the field; to driving an SUV and defending against chemical, biological, radiological and nuclear weapons.

REACT is the only training course of these characteristics that takes place in Spain and to date it has trained more than 400 people. Throughout its 25 editions, the Helsinki Spain Association has worked under the conviction of the transformative power of education and the need to train people from all kinds of countries and situations in conflict prevention, crisis management and post-conflict, as the best instrument at our disposal to contribute to the global efforts for the construction of Peace.

Inauguration of the REACT program in its XXV edition

Yesterday, we successfully launched out REACT’s course XXV edition (Rapid Expert Assistance and Co-operation Teams). The Social Centre Platja Albir de l’Alfàs del Pi in Alicante, Spain kindly welcomed us in their facilities and gave us the space we required to implement the course. This year’s participants will be staying in Alicante until 26th June and will later go to Segovia to receive a practical training course about handling the critical situations and/or emergency situations while being deployed in hostile environments.

During our opening event, the Cooperations and Volunteering councilors: Isabel Muñoz and Martine Mertens as well as Equality councilor: Rocío Guijarro joined our president María Jaén Barandiarán and our secretary general Ángela Suárez Jaimes to welcome the participants who assisted.

REACT, ever since its creation in 2003, has maintained its main goal to be: prepare professionals with diverse career paths who are interested in joining REACT also from the Organization for Security and Cooperation in Europe (OSCE). This year this course takes in people who have traveled from different parts of the world such as Afghanistan, Argentina, Cameroon, Colombia, Spain, Ethiopia, Mexico, Nigeria and Togo with the purpose of providing necessary knowledge and abilities to achieve a good management in peacebuilding and conflict prevention.

In this edition, REACT has the honor to receive professors and lecturers who have vast knowledge in humanitarian action, human rights, gender equality, peace missions, etc. and they also have the experience of working in international organizations such as the United Nations, European Union, OSCE, OTAN, International Committee of the Red Cross, NGOs with a humanitarian nature, among others.

For our first course that took place yesterday, our participants attended the lecture regarding the topic International Human Rights Law taught by Professor Adam Dublin who was a legal fellow in the United Nations Office of the Co-Prosecutors at the Cambodian genocide tribunal and also worked in India in issues related to human rights and girls and women’s protection.

REACT has the objective to give participants the knowledge and the necessary skills to be able to comprehend and analyse the principal threats to peace, international security, the contexts in where armed conflicts emerged, the key actors that intervene in those and the impact that the conflict has on civilians.

To achieve these objectives, the course has a dedicated group of professors. Experts on different areas, as well as workers on the field. Moreover, the course is formed by students from different nationalities, which enriches the experience even more.

REACT is the only training of this kind that takes place in Spain and so far, it has trained more than 450 students throughout these last editions.

The new REACT edition is open for applications. The course will take place from the 31st of May to the 2nd ofJ uly, it will consist of five weeks of intense training, including a module of simulation in hostile environments.

More info about the REACT programe 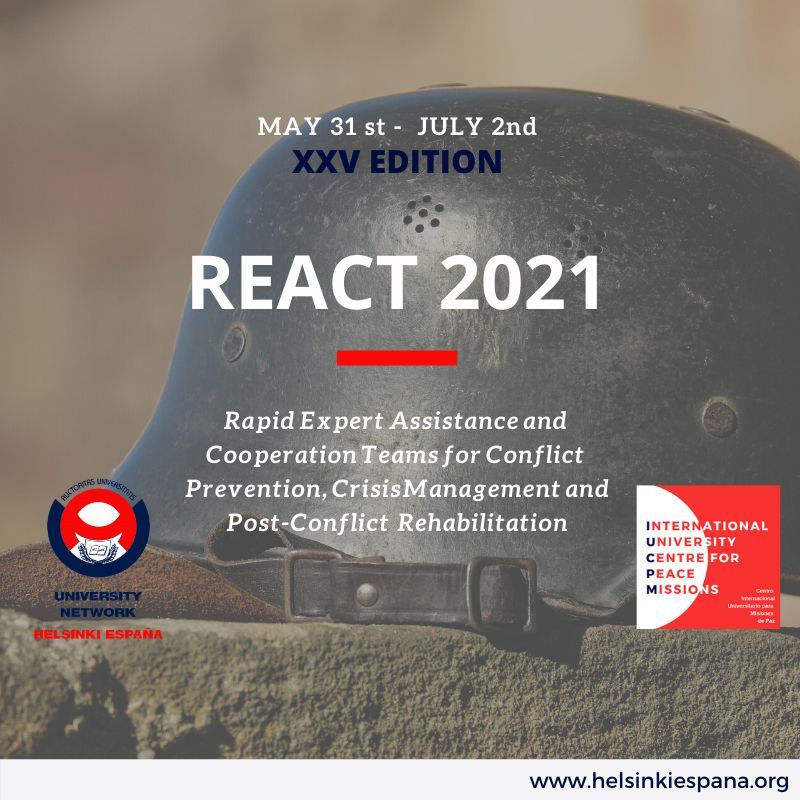